Professor Brad H. Turing strides into the room while carrying a globe of the Moon. Although it is 10pm and many students are tired, they snap to attention when they hear their professor’s lively footsteps carrying him towards the front of the classroom. Once he reaches the lecturer’s desk in front, the place is silent, and even students in the back row can hear when he places the globe on the desk.

Good morning, students, and welcome to another year of Astronomy. I enjoyed teaching First Year Astronomy last term, and I am glad to see everyone back in class after the term break.  This will be our last year together, as Professor Gagarina will be taking over your classes next year.

I will be using similar class expectations as last year for this year. My class expectations are very basic - show up to class, take notes, do your own work, and ask for help if needed. You will also be happy to know that if you attended my class last semester, you will not have to buy new items for class; there is no textbook this year, and you can use your von Rheticus model magical telescope from last year. Please bring the telescope to class every lesson from next week onwards.

There is one major change to the class expectations; this term, there will be two required Astronomy essays. One of the required essays will be this week’s Introductory Essay, and the other required essay will appear later this year. If you are nervous about these essays, do not be; think of it as another way to express your thoughts. You also have access to last year’s extra credit essays; feel free to “warm up” on those essays before attempting this week’s essay if needed.

This year we will be focusing on learning more about the Moon. As you know from last year, the Moon plays a very important part in magical life. This is why, for example, wizarding Athabascan people call the Moon “The Lifebringer”. Even though the Moon’s light is actually light reflected from the Sun, that light affects us on Earth in a unique way. For those growing up in magical households, for example, we probably have heard warnings about werewolves being turned into their beast forms due to the influence of a Full Moon.  For those growing up in Muggle households, perhaps you heard stories about witches - inaccurate as they may be - associated with the Moon; the Muggle’s image of witchcraft is an elderly woman wearing a pointy-hat and riding a broomstick at night across the backdrop of the Moon.

We also discussed lunar phases last year; we will be speaking more about lunar phases next week. As you may recall, the lunar cycle is approximately 30 days, and during that cycle, the Moon goes from a New Moon (not visible to us), to a Full Moon, to a New Moon again. We discussed the hazards of using a magical telescope during the Full Moon. We also discussed the many different magical effects of the Full Moon. We even discussed terms that are related to the Moon’s phases - terms like “waxing” (growing) and “waning” (shrinking). We learned a bit about how to use a Lunar Phase Chart, and we learned about Lunascopes, which are magical devices that can be used to predict the Moon’s phases.

We also talked about the appearance of the Moon. We discussed how it is easy to predict the type and intensity of magic from the Moon because the same side of the Moon, which is called the Near Side of the Moon, always faces us due to synchronous rotation. The dark areas of the Moon are actually flat and volcanic in origin; these are called “mare” and have very low magical albedo. The light areas are jagged and called “highlands”; these have high magical albedo. We measured the albedo and size of the Moon through our magical telescopes.

We discussed the A.M.E., or the Astronomy Magical Effect Quotient, of the Moon. The A.M.E. of the Moon is very high because the Moon has a heavy magical influence on the Earth. We discussed the individual components of the A.M.E., including composition, observed size, albedo, teamwork, and surface. One major reason why the Moon’s A.M.E. is high for us on Earth is because the Moon is so close to the Earth. The relationship between the Moon and the Earth can be described as an indirect version of “teamwork” in the A.M.E. Next week’s discussion on tides will explain how the Moon works together with the Earth to create physical and magical tidal effects.

We also talked a little about the Earth’s Moon and how it differs from the Moon(s) of other planets. The Earth is the only planet in the Solar System that has exactly one moon. As such, the Moon has a very strong effect on the magic felt on Earth. The Moon does not need to “compete” with other moons to show off its magic because it is the only Moon orbiting the Earth. If we were to live on a space colony floating over Jupiter, on the other hand, we would have to take into account the planet’s many moons, and we would have to study a lot more about them and how they interact with each other before performing any moon-based magic. Imagine having to use several Lunar Phase Charts at the same time!

There is another aspect of our Moon that I had hinted at last year but did not describe fully: one advantage that us Earth-based wizards and witches do have is that the Moon is spherical in shape. This may seem like a very basic observation, but the spherical shape does concentrate the magical power of the Moon - had the Moon, say, an irregular shape, it would not have as much of and as predictable a magical effect. Not all moons are spherical in shape; in particular, I mentioned that Mars’ Phobos and Deimos are potato-shaped. 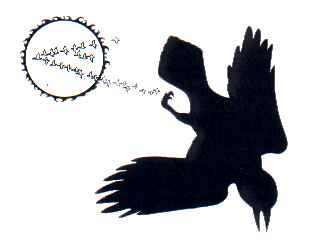 This year, we will be learning more about some very exciting topics relating to the Moon. We will learn about how tides, phases, and eclipses work. We will also discuss the magic behind a syzygy, which is the alignment of three astronomical bodies. A good portion of the year will be focused on studying mooncalves, fluxweed, lycanthropy, and other magical applications of lunar magic.

In the last lesson, there will be a special treat. I will be telling an Athabascan story about the Moon. Our creation story features the Raven, a trickster character, and how his actions created the world that we see today. I am very excited to share my people’s culture with you.

That is all the time I have for today. Thank you for your time. Class is dismissed.

The Moon and the moons of the other planets in the solar system.