Good day everyone! Today we are going to look at two creatures, both classified as XX by the Ministry of Magic: imps and Jobberknolls. I paired these creatures together because they both have very distinct characteristics not seen in creatures we have previously studied. As a reminder, your final exam is coming up two lessons from now. Make sure to be reviewing all material and feel free to owl myself or Professor Cattercorn with any questions you may have. 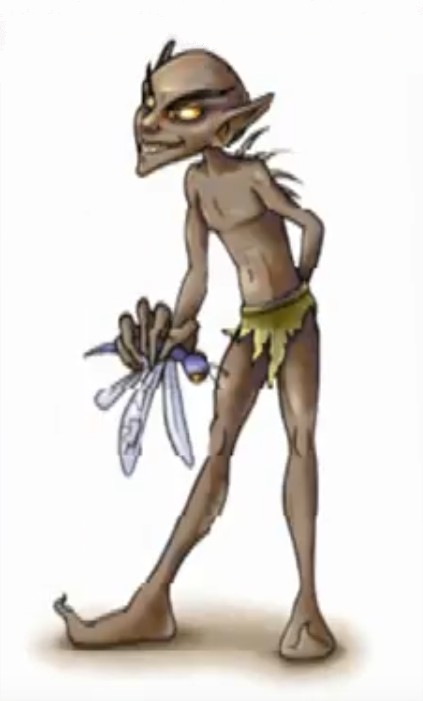 First, let’s take a look at imps. Imps are small, six to eight inch tall, creatures that are anywhere from dark green to brown in color. They currently are only found in the swampy marshlands of Great Britain and Ireland, though they can be exported to other countries to be studied.

Imps, though closely resembling pixies, cannot fly because they do not have wings. However, they make up for this inability with their humor. Imps have a very simple form of humor, much like that of a young child. They enjoy tripping people in the swamps, tying their shoelaces together, etc. This unique characteristic is not seen in any other creatures recognized by the Department for the Regulation and Control of Magical Creatures. Sure, some have some joking tendencies, like leprechauns and their fake gold, but none go as out of their way to pull them. If an imp even hears a human nearby, they will run towards them, already planning how to prank them.

An imp’s diet consists of leaves, algae, and water bugs. Imps will also eat frog or fish eggs when they find them. Imps use their tricks to lure water bugs, like beetles and dragonflies, into their homes. This could be creating movement to cause beetles to come closer, as the beetle thinks their is a body to attach themselves to. It has been confirmed that imps have the intelligence to make little nets and baskets out of seaweed and sticks, and can also use them to capture their prey.

Imp breeding is fairly similar to that of some snakes. Their young are born live, and they can have anywhere from one to ten babies at a time. Imps make their nests using algae, weeds, and sticks along the shores of the swampy areas they inhabit. Their nests resemble that of a beaver’s dam, with a covered top and a very small entrance. After the young are born, they will stay in the nest for three to five days. The parents will then demolish the nest and show the babies their new environment. Imp humor is something that is taught, so imps will teach their young the intricacies of tripping humans and tying their shoelaces together.

In regards to imp humor, several different studies have been done to try and determine the purpose of the trickery. While several studies have concluded that it is for the imp's amusement, a recent study is trying to prove that it is somehow beneficial to them and increases any magical abilities they might have. Imps that had played more pranks appeared to have stronger magical abilities than those that pulled fewer pranks.

Going off of this, it is believed that imps have a brand of magic as strong as a House Elf's. This is still contested, just like gnome magic. It is thought that imps use this magic in their trickery. There are many cases where logs and other objects people have tripped over have simply “appeared” from nowhere. It is believed that imps will transfigure objects into logs and the like to help with the pranks. In some cases, they may even just enlarge each other to act as logs or barriers. If this is true, that means the imps would have to teach their young how to perform the magic used in their tricks. This teaching could come from young watching the adults performing these pranks and eventually working up to pulling their own.

Some individuals feel they are excellent garden pets. If someone were to attempt to enter your yard, the imps would pull pranks on them, most likely causing the individual to leave. This has some obvious advantages. An intruder would never know the imps were there until after the prank has been pulled. You also do not have to regularly feed them, as they will eat insects and such around your yard. However, there are also downsides. They prank everyone, so they will also prank you and any friend or family you have over. You also need to have some sort of river or pond for them, so they can build their breeding nests and live comfortably.

With that, let’s move on to Jobberknolls! Jobberknolls are a small, speckled blue bird that lives in North America and Northern Europe. They adapt to their location and can live in any type of climate. Two things make Jobberknolls unique: their ability to remember things and their inability to make noise until their death. Jobberknolls make no sound until their death, upon which they recite everything they’ve ever heard, backwards. They will then fall to the ground, lifeless. The Jobberknoll will basically scream everything it has ever heard, making the death sequence very pronounced and obvious. As you can imagine, it is a very traumatic event for both the creature and anyone around to hear it.

Their death can be caused by a number of things:  age, health, and what they hear. If a Jobberknoll lives to its full potential, it can live anywhere between ten and fifteen years. Imagine hearing the death of a Jobberknoll living fifteen years! It certainly would have a lot to say. They can contract different diseases from mundane birds that can cause them to become ill and pass away. Sadly, their magic does not heal them. Upon this type of death, the Jobberknoll is often not able to complete its recitation. Finally, a Jobberknoll can be killed by something it overhears. For example, if a Jobberknoll hears a violent crime take place, the shock can cause their heart to fail. This means that a Jobberknoll can die very early in life if this were to happen.

While Jobberknolls make no noise during their life, they do spend their time doing other things. Jobberknolls lay a pair of eggs once every two months. This means they have twelve chicks a year. Their eggs are white with blue spots, the blue depending on the female’s blue. Both the male and female take turns sitting on the eggs, which take seventeen to twenty-one days to hatch. The male then takes care of the babies until they are two weeks old after which they will leave the nest and start their own life. They will start breeding when they are about four months old. Jobberknolls do mate for life. When a Jobberknoll’s mate dies, their death follows within seventy-two hours.

Jobberknolls create a creamy substance in their crop, or second stomach, to feed their young. It is called lait, after the French word for milk, because the French wizards were the ones to discover this. We see this term since applied to magical and mundane birds. In English, it is also called crop milk. 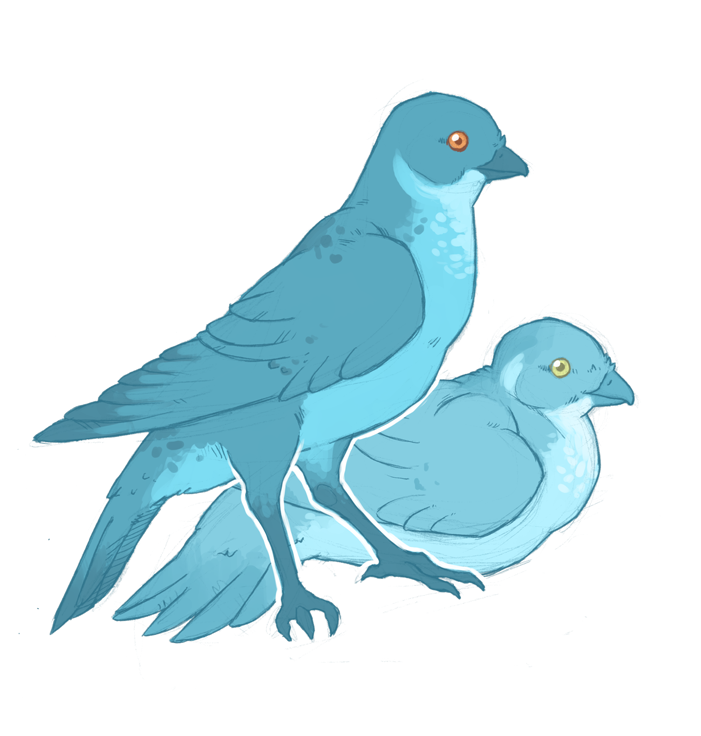 While licenses are not required to keep Jobberknolls, it is recommended that when their health starts failing, a Silencing Charm is placed on them, so you do not have to listen to their long screams during their death. Jobberknolls are kept to collect their feathers. Jobberknolls need large areas to live in, usually enclosures that are ten feet tall by fifteen feet long. You can keep several pairs of Jobberknolls together since they will not fight. It is best to supply the Jobberknolls with insects so you can control the color of their feather. This ensures the exact shade you are looking for.

Jobberknoll feathers are used in various memory potions and truth serums. Jobberknolls have a special gene in their genetic makeup that helps them remember everything they’ve ever heard. Using the feathers in potions enables the gene to be utilized, and increases the power of memory potions and truth serums. Feathers are best collected as the Jobberknolls shed them. Most breeders collect feathers daily, in the evening, after the Jobberknolls have gone to sleep. This makes it easier to collect and clean the enclosures, though you do have to be careful not to disturb the birds.

This was one of my favorite lessons so far, because of how unique these creatures are. I know when I first learned about them I was fascinated by their abilities. You will now have a ten question quiz and an optional short essay to complete! Next week we will discuss my favorite magical creature of all time. It will also be the last magical creature covered this term. Make sure to start reviewing the content covered this year, as the final is just around the corner!